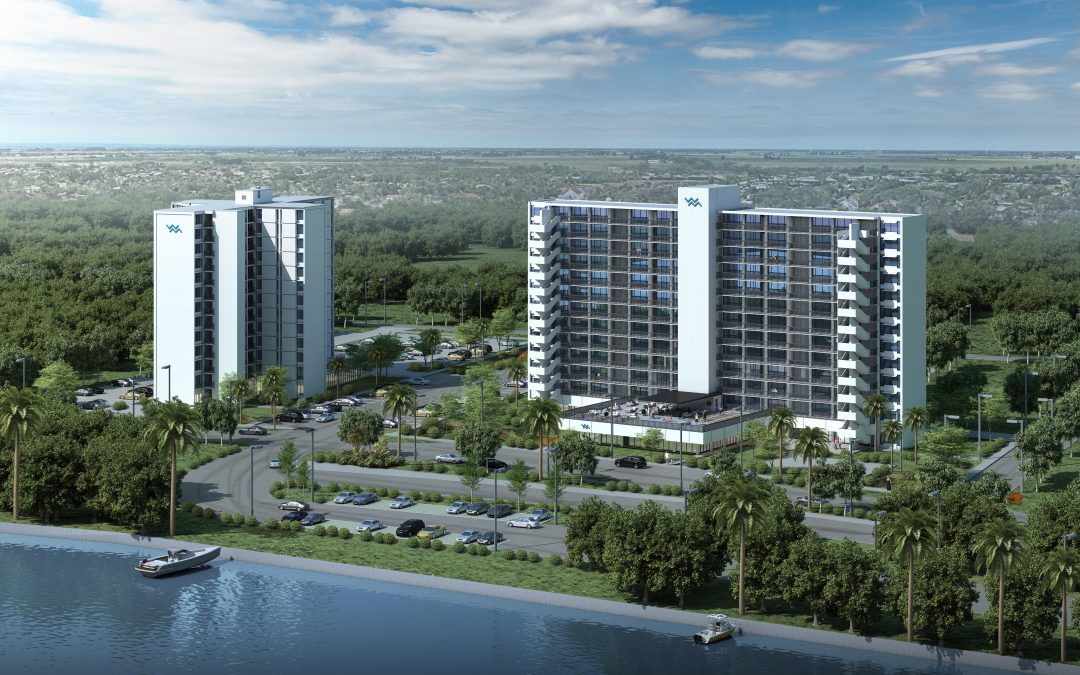 DAYTONA BEACH — Glentina Saunders lives in the kind of place many people can only dream about. Her Beach Street apartment overlooks the boats and yachts docked in Halifax Harbor Marina, and from her ninth-floor balcony she can watch the vessels float down the river by day and see the lights on the new Orange Avenue bridge twinkle at night. If she looks out her window facing to the south, she can see rockets launching from Kennedy Space Center located an hour’s drive away. “I fell in love with this area,” the 84-year-old said.

While it sounds like an idyllic spot for high-dollar condos, Saunders pays $263 per month for rent. Her apartment building a few blocks south of Orange Avenue is a Daytona Beach Housing Authority property that makes no apologies for sitting on prime real estate. And the 50-year-old public housing is not being allowed to languish just because its lower-income residents pay a small fraction of what many other local residents do for rent and mortgages. Saunders’ building, the Maley Apartments, and its companion tower next door called the Windsor Apartments, are about to undergo $58 million of improvements. Work is slated to get under way in late July, and when it’s done next summer the 300 units spread across the two buildings will have everything from new bathrooms to new plumbing to new appliances. “This will be like they’re moving into a brand new apartment,” said Terril Bates, CEO of the Daytona Beach Housing Authority.

The Windsor and Maley are dedicated to residents of very limited means, and their rent is based on their income. To live there, residents must be at least 62 years old, or have physical limitations. For many residents, it becomes a low-income retirement home they stay in for the rest of their lives. Tenants often wind upmaking it their home for decades. Some of them are leery about having to temporarily move into empty apartments in the buildings while their units are being worked on. But they’ve been reassured no one is getting kicked out, and in about a year they’ll all be settled into modernized, renovated apartments for the same affordable rents that include electric and water.

The Windsor and Maley project is part of a $100 million plan for the Daytona Beach Housing Authority to renovate 625 of its existing units and build 90 new units for low-income tenants. Work on all of the projects within the plan is hoped to wrap up in about two years. “It’s really significant for affordable housing in Daytona Beach,” Bates said. Much of the city’s government-funded housing is 30-50 years old, so two years ago the Housing Authority held a developers’ conference to find a partner to renovate the subsidized units concentrated in the city’s urban core.

The Housing Authority chose to work with developer BGC Advantage on the vast project. A limited liability corporation has been set up for BGC and the Housing Authority to partner on the housing ventures.
While BGC has become part of the Windsor and Maley ownership structure, it will not become the sole owner of the apartments. The Housing Authority will lease the property to BGC, and the agreement prevents BGC or any other private company from taking over for at least 30 years, Bates said. BGC was brought into the Housing Authority projects largely to help with financing. The newly formed LLC has been able to apply for various types of debt, equity, grants and other available resources, Bates said.

The Windsor and Maley renovation will be paid for with a variety of funding sources including bonds, tax credits, equity investors and a loan. The city is not incurring any risk or debt, or contributing financially to the project. The City Commission had to OK $58million in bonds last year only because the city created the Housing Authority in 1938, and it’s technically an instrument of the city, with its board appointed by city commissioners. BGC Advantage, which has its headquarters in Louisiana, is providing the guarantee for the bond issuance. The bonds will be handled by a third-party company, Bates said. “It’s investor groups,” she said. “We won’t be selling them. The Housing Authority will be a conduit issuer of the bonds. We’ll submit an application to the state. The state controls the bond pool.”

Joining with a private partner is a huge advantage for the Daytona Beach Housing Authority. The U.S. Department of Housing and Urban Development, which many people know as HUD, typically will provide $1,200 for each unit that needs improvements, but many need around $25,000 per unit.

The storm of work before the calm returns

The apartments in the two adjacent towers have undergone assessments of their windows, doors, lighting, flooring, air-conditioning, elevators, water meters and other things. The plan is to re-do each unit’s bathroom and kitchen, add energy-efficient appliances and modernize the look of the apartments. Residents will be moved into empty units as needed while work is going on. About three dozen apartments became vacant since the end of last year as people died or moved, and they were purposely left empty to make the plan work. The Housing Authority will also be tackling renovation of properties on Keech, Whitney and Ninth streets in Daytona each that will involve 325 family units. If anyone has to temporarily move while work is going on, the Housing Authority will cover all expenses.

“There’s no way this will not be disruptive, but we’ll try to keep them in the same location,” Bates said.

The agency is also moving toward construction of 90 new units for low- and moderate-income residents behind the Housing Authority’s Pine Haven Apartments a few blocks east of Nova Road and north of International Speedway Boulevard. At the Windsor and Maley, there’s some fear of the unknown. And there’s reluctance to move all their worldly possessions to a temporary home, and then move everything back when the overhaul is complete. Tribley Thomas has lived in the Maley Apartments for 25 years, and the upcoming changes have the 78-year-old a little rattled. She’s worried about an ownership change, and where she’ll land after the construction dust settles.

“We’ve lived here so long, we don’t want to lose our apartments,” said Thomas, who has been in the same unit for more than 20 years. She said she was homeless when she first moved into the Maley in 1996, and the apartment building gave her a place of her own with caring staff and friends. “We have really got a sweet manager who does everything for us,” Thomas said. “I like living here. It’s home to me. I thank God I got the apartment. They’ve been good to me. I would hate to lose the apartment.”

Saunders left New Jersey and moved into the Maley in 1999, the year she decided to retire at age 62 because of worsening arthritis. She’s been in her current apartment for most of those 22 years, and she also hopes she doesn’t lose the unit when everyone gets shuffled around for the renovation work. It’s possible some people might wind up in different apartments after the work is complete, Bates said.

“I would like to know what they’re doing,” Saunders said, conceding she hasn’t taken part in some Zoom meetings on the project. She’s not overly worried, though. She’s just grateful to live in a place with so much she enjoys. There’s the large gazebo out front, where the steady breeze coming off the river makes it a pleasant place to spend time even on a hot day. Gentle winds also whirl around her balcony, where she has a comfortable chair to take in the view.

“I love the scenery,” Saunders said one morning last week as she sat on a gazebo bench looking out toward the river. Her apartment has less living space than she was used to when she first moved in. “You walk into the kitchen and living room at the same time,” she said. But she figured out a way to make her small one-bedroom apartment more bearable. “My door is open a lot,” she said. She has a car and still drives, so she can get out when she wants to. She also has plenty of friends in the apartments. “I’ve been blessed,” Saunders said.

‘This was my husband’s dream place’

Sally Jass also feels like she found a great place to retire. The 72-year-old and her husband had a blended family with a total of nine children, so after years of helping them financially, there wasn’t much money left for retirement. “Social Security isn’t as much as you think it’ll be,” Jass said. “With rent and utilities you can barely live.” Many residents worked for cash when they were younger, so their Social Security checks are small, Bates said.

When they moved from Wisconsin, Jass and her husband were thrilled to find a place across from the river they could afford. Their apartment on the 11th floor of the Windsor was their little slice of paradise, but their happy retirement together was cut short two years ago when her husband died one month before his 80th birthday. “This was my husband’s dream place,” Jass said. “No upkeep, and you can see the ocean and the river. You can see the horizon. You can see how it curves.” Jass remains in the same apartment that provides spectacular views of the sunrise, the place she has called home for 12years. It’s where she plans to spend the rest of her life. “This is my home,” she said. “I have a very large family here in this building. We look out for each other. Staff is very friendly. I have to honestly say this is the happiest part of my life.”

Jass also found a new purpose when she moved into the government-funded housing. The U.S. Department of Housing and Urban Development requires the Daytona Beach Housing Authority Board to fill one of its board slots with a tenant of the city’s public housing. For four years, Jass has served as a resident commissioner of that board. The position has allowed her to attend conferences as well as board meetings, so she’s always up to speed on what’s happening with Daytona Beach Housing Authority properties. She likes what she’s heard about the Windsor and Maley remodeling, which will mostly focus on the building’s interiors. Extensive repairs and renovations will be made to electric and plumbing systems, and the apartments will get new kitchens, bathrooms, flooring and lights, Bates said. “The pros so outweigh the cons,” Jass said. “Everything will be so much nicer. They’ll replace everything in the apartments.”

Even the ground-level entry floors of each building will be improved and will see the addition of a place to get coffee. New landscaping will also be added, along with a decorative fence. Both buildings will be under construction at the same time. It will be some of the most extensive work done on the apartment towers since the Windsor was built in 1967 and the Maley was completed in 1972. “I can’t wait,” Jass said.