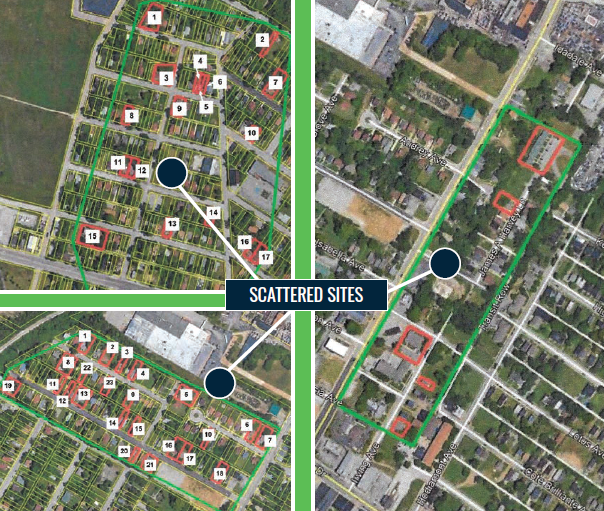 The Wellston Tenant Association just wanted justice for their community.

“We remember what Wellston was like in days gone by,” Flora Mix, the association’s president said on September 4. “It was a beautiful, thriving community with good housing and lots of businesses. We know what Wellston can be again. Wellston needs investment, not demolition.”

In August 2018, tenants learned that the U.S. Department of Housing and Urban Development (HUD) was planning on demolishing approximately 200 public housing structures in Wellston. It would have displaced about 530 people or 174 families — about one-fourth of Wellston’s residents. Wellston is a historic Black community located just outside the limits of the City of St. Louis.

But the tenants and Wellston community overall came together to fight for their homes. And they won, after employing an expansive group of elected officials and organizations to advocate locally and in Washington, D.C. on their behalf. On September 4, those leaders gathered to announce a $30-million redevelopment agreement, which includes a provision to create a city-run nonprofit that will own all the renovated units in 30 years.

“It is a remarkable step forward for the good people in Wellston and could not have been achieved without close, bipartisan cooperation to fight to save affordable housing,” said U.S. Rep. Wm. Lacy Clay (D-St. Louis), who worked alongside U.S. Sen. Roy Blunt (R-Missouri) on the project.

Mix said all the public housing tenants in Wellston were grateful to these elected officials — “most especially our own Mayor Nate Griffin” — for hearing them and responding to their demand for justice.

One of the most important aspects about the redevelopment plan is that the city will eventually own the housing, Griffin said.

“I’ve been working towards taking over ownership since I came into office,” he said.

HUD’s decision to demolish the housing was completely unexpected. In fact, Griffin and other city officials had been negotiating with the federal agency for a year to regain local control of the Wellston Housing Authority, which consists of some 200 public housing structures scattered throughout the city. The city lost control in 1996, when the federal agency took possession and governance of the housing authority due to a breach of contract.

On April 19, 2018, Daniel Sherrod made an impassioned speech at his last board meeting serving as chair of the Wellston Housing Authority Board of Commissioners, according to the meeting minutes. He said that Wellston had “earned its rightful place” to regain control.

“You all should be happy that I am leaving because that means that you are within six months of transitioning back to local control,” said Sherrod, who is an employee of the HUD St. Louis Field Office.

At the May 2018 meeting, the commissioners announced that the plan to transition control in September was still underway. However, in August the commissioners announced that the housing authority was struggling and the decision was made to dissolve it, rather than transfer operation back to the city. This decision meant demolishing all of the properties.

A significant turning point came in July 2019, when newly elected St. Louis County Executive Dr. Sam Page refused to sign off on the Trump Administration’s plan to demolish the structures. The demolition plan had the backing of the previous county executive Steve Stenger, who had resigned and pled guilty to federal corruption charges.

At the September 4 press conference, Griffin said he had been looking for a developer that wanted to be a true partner with the city and who had experience in affordable housing projects. He believes they found that in BGC Advantage. It has been a long time since Wellston had new development, Griffin said.

“It will have a domino effect to spur other development projects if we get this done right,” he said.

That’s why it’s also important that BGC has pre-development capital, which helps ensure that the project won’t stall. A big emphasis will also be on minority inclusion and reaching out to minority-owned and women-owned enterprises to help with construction.

To view this article in it’s entirety click here.